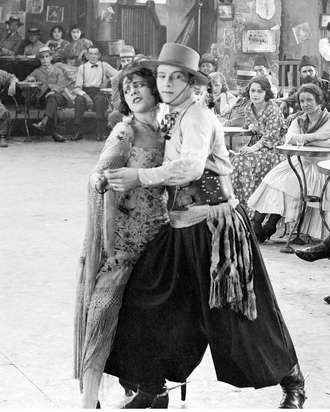 In a tango dystopia, we may end up dancing with masks forever, move towards gas masks, diving suits or even opt for a safer hologram partner. Indeed, the proximity between heads among tango dancers could easily be perceived nowadays with caution from a hygienic point of view. But… was dancing tango always such a close encounter?

In the scandalous early days of tango dance, those where tango was spreading in brothels and whorehouses, the kicks and flicks of the legs intertwined in fast an audacious movements were outraging the moral codes of the respectable upper-class families of Buenos Aires. There are endless chronicles in the news at the turn of the 20th century shouting with indignation because of a slippery tight embrace or an ostentatious provocative display of sexual movements. However, it is not clear whether the lips were approaching or the breathing was mixing during the dance (no reference to germs whatsoever!).

In fact, quite likely tango evolved from the influences of a series of European rhythms and dances such as the Polka, the Mazurka, the Habanera, and the Andalusian tango, in combination with styles directly inherited from African roots. In most of those early influences, couples were dancing quite apart from each other, and many were actually solo dances.

However, two iconic events were to transform the way in which tango salon was supposed to be danced, or at least that is what the stories say…

At beginning of 1921, Tito Lusiardo and Olinda Bozán were doing a tango performance in the Teatro Apollo. According to the legend, the safety pin holding Olinda’s dress came undone. To dissimulate such inconvenient, she held her clothes with her hands on her back and approached her partner, pressing the heads together and reducing the space of the embrace to disguise the improvised solution. At the end of the show, the audience exploded with euphoric applauses and the couple decided to keep the new posture in further presentations, later on imitated in the milongas.

The second event took part in the same year, during the filming of “The Four Horsemen of the Apocalypse”, directed by Rex Ingram and with Rudolph Valentino as the main star. In one scene, Valentino, dressed as a gaucho seductively dances a tango. Despite the ridiculous performance, at least from our view from today, the couple walks towards the camera, cheek to cheek, immortalizing the “salida americana” and spreading the popularity of the movement.

I leave you now with that scene but warning you against the success you may have if you chose to follow Valentino’s dressing code, with a Mexican poncho and a Catalonian hat…